The Aston Martin DB6 is still one of the most recognizable cars from the British automaker’s history, but while Aston had experimented with body styles that weren’t coupes and convertibles with various Lagonda models, it never made plans to field station wagons. But this didn’t stop customers from relying on British coachbuilders to construct shooting brake versions of a variety of sports and luxury cars.

Radford was one such coachbuilder, and in a couple of weeks a very rare example of an Aston Martin DB6 Vantage Shooting Brake will be offered at Bonhams’ Quail auction on the west coast.

The DB6 Vantage, of course, is powered by a 3,995-cc six-cylinder with a five-speed manual transmission, good for 325 hp, and features disc brakes all around. The performance served up was phenomenal for the time, offering a top speed near 150 mph and quarter-mile times in the mid-14 seconds. At the time this was nothing short of supercar performance, and combined with a sleek body and modest dimensions, the DB6 Vantage was a serious performance machine, finding plenty of popularity in Europe and in the U.S. 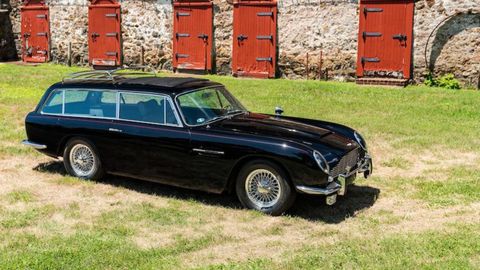 This is one of six DB6 cars converted by Radford.
BONHAMS

Just how did this conversion materialize?

This DB6 Vantage was ordered to be built as a shooting brake from the start by Middleton George Charles “Middy” Train, who worked in his family real estate business in Washington, D.C., and also enjoyed golf and duck hunting. Just about every option box was ticked when the car was commissioned, and the car was briefly registered in the U.K. in 1966, presumably for road testing.