In 2007, World Famous SamG was simply Sam Granger: married, unemployed, and 37 years old. He was sitting at home, using his computer to reapply for jobs he’d applied for before, “just killing time to keep my wife from fussing at me,” he told us. Up popped an online quiz, “Find Your Perfect Job.” 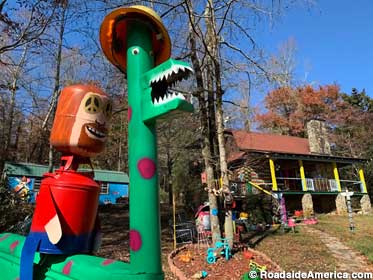 The quiz, Sam remembered, was long and very detailed. It took 45 minutes to complete. When he’d finished, Sam was told that he should be an artist. “I can’t even draw,” said Sam, but he nevertheless took a piece of plywood, laid it in the bed of his pickup truck, and painted a rough approximation of his Uncle Speedy. “I tried to sign my name, but I couldn’t write little,” said Sam. All he could fit was, “SamG.”

Sam said that he never saw that magical quiz again.

As the newly christened SamG, Sam spent the next few years on the art show circuit. He began calling himself “World Famous SamG” to boost his credibility, figuring that at least a few people might believe it. A brief fling with reality television earned him the moniker, “Perfect TV Hair,” and he advertised “Free Hugs” to everyone. But the business end of art saddened Sam. So in late 2016 he essentially rejected the outside world and began creating his own utopia, World Famous SamG Land, in his front yard.

The Mothership is SamG’s studio, where he’ll probably be working when you visit. 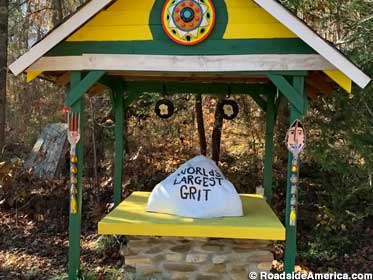 For years the World’s Largest Grit had to be stored upside-down in SamG’s yard to keep the dog from peeing on it.

If your knowledge of roadside eccentrics comes from Hollywood slasher movies, then World Famous SamG Land may seem like a place to avoid. It’s hidden in the woods behind a gas station, and the only way in and out is over a ramp near the diesel pumps and down a narrow unpaved road hemmed in by trees. One of the first artworks you see is a naked woman with a bucket for a head. “If people are scared to jump that ramp, they’ve got too much worry to have an adventure,” said Sam. He genuinely enjoys visitors and goes out of his way to be friendly — the hugs are indeed free — but he doesn’t have time for tourists too timid to make it past his driveway.

When people do stop by, Sam is often at work in his studio, which he christened The Mothership and painted to resemble a giant space slug. “I want to be a tourist attraction,” said Sam, who’s a big fan of roadside wonders. In fact, Sam has taken the analogy a step further and says that now he is the art, and all the things he creates are just “souvenirs.” He always keeps a two-dollar bill in his pocket, he said, because it costs two dollars to ride to the top of the Sombrero Tower at South of the Border, and when he dies he wants his ashes chucked from the Sombrero’s brim.

The Mothership’s pumpkin-colored walls serve as an outdoor gallery for SamG’s art.

SamG gazes toward the future as he test rides his Time Traveling Machine.

Mortality is not an abstraction for Sam. In 2017 he nearly died from a ruptured aorta while sitting on his toilet. The toilet seat is now one of many oddities on display at World Famous SamG Land.

One thing Sam definitely does not want is for World Famous SamG Land to outlive World Famous SamG. “Once I’m gone, tear it down, sell it off,” said Sam, who said he’s visited too many art environments where the magic vanished once the artist was no longer there.

World Famous SamG Land won’t be around forever, Sam suggests, so if you want to see it, see it now.

Sam has crafted thousands of artworks since he took that online quiz, and yet by his arithmetic all of the creations in his yard — the brightly colored robots, dinosaurs, giant bugs, and painted commands such as, “Be Nice But Don’t Take Crap” — only count as one. “People tell me, ‘I didn’t think there would be this much,’ but I really don’t have that good a work ethic,” he said. “If I did, I’d have a lot more done.” 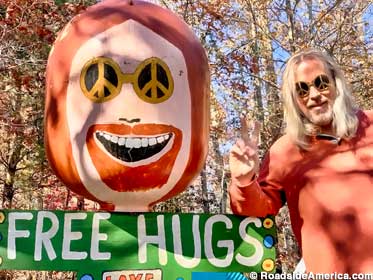 Sam likes to show visitors around World Famous SamG Land, lingering at crowd-pleasers such as the World’s Largest Grit; and a big version of Sam’s head painted on a pool filter tank; and a grinning donkey titled, “Kiss SamG’s Ass,” which Sam said no visitor ever kisses on the mouth. Sam’s Time Traveling Machine, he said, was made from a feed trough and floor fan. “You sit in it and relax for 20 minutes,” said Sam. “When you get out you’re 20 minutes in the future.”

Sam is also proud of his Nature Trail through the woods, which is where a lot of his art ends up when he gets tired of it. There are mossy doll heads and plastic yard Santas being swallowed by the undergrowth, and displays such as “Future Bottle House” (a shopping cart filled with bottles) and “Coffee Cup Graveyard,” a place where cups can escape the purgatory of thrift stores, where no one ever buys them. “The goal of my Nature Trail,” said Sam, “is that I want it to be so bad that it’s awesome.”

Sam said that most of his visitors enjoy World Famous SamG Land, and that he’s had no trouble with human vandalism, although bears sometimes knock over his displays at night. “Most everything I put out here is temporary anyway,” he said. “Come back tomorrow and there’ll be a little something different.”

1390 Tom Born Rd, Clarkesville, GA
Directions:
Northeast of Clarkesville. From US-23 turn north onto Tom Born Rd, then immediately turn right into the gas station. Either park there, or take the small ramp over the curb to the right of the diesel pumps onto a little dirt road that leads into the woods. SamG Land is back there.
Hours:
Call first if you want to be sure to meet Sam. (Call to verify)
Phone:
706-949-3504
Admission:
Donation box on site, or buy an artwork from SamG.
RA Rates:
Major Fun