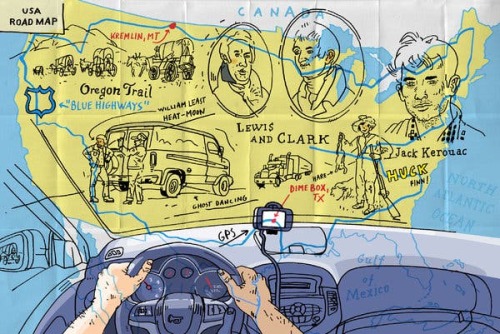 Once upon a time, we traveled by map. In the United States, the map, whether it be a Conquistador sketch, a Rand McNally atlas or a foldout picked up at a Union 76 station, the sort you never fold the same way twice, is holy. Maps are the only way we know our country is a country, a unified thing instead of a series of fields, forests and cities that go forever. Maps are mystery. You cannot look at the names of the towns and ranges without imagining yourself absorbed in experience — the jagged line of the Sawtooths, the peak of which you know is approached by roads lined with motor courts, or the vein of California’s Highway 1. Along that road, I see myself visiting San Simeon to see where William Randolph Hearst and Marion Davies entertained Charlie Chaplin, or that fingernail of coast where William Finnegan still waits for the wave that will carry him to God. An hour with an atlas just makes me want to go.

(via Rediscovering the World of ‘Blue Highways’ – The New York Times)